Evidence of Seasonal Uplift in the Argentière Glacier 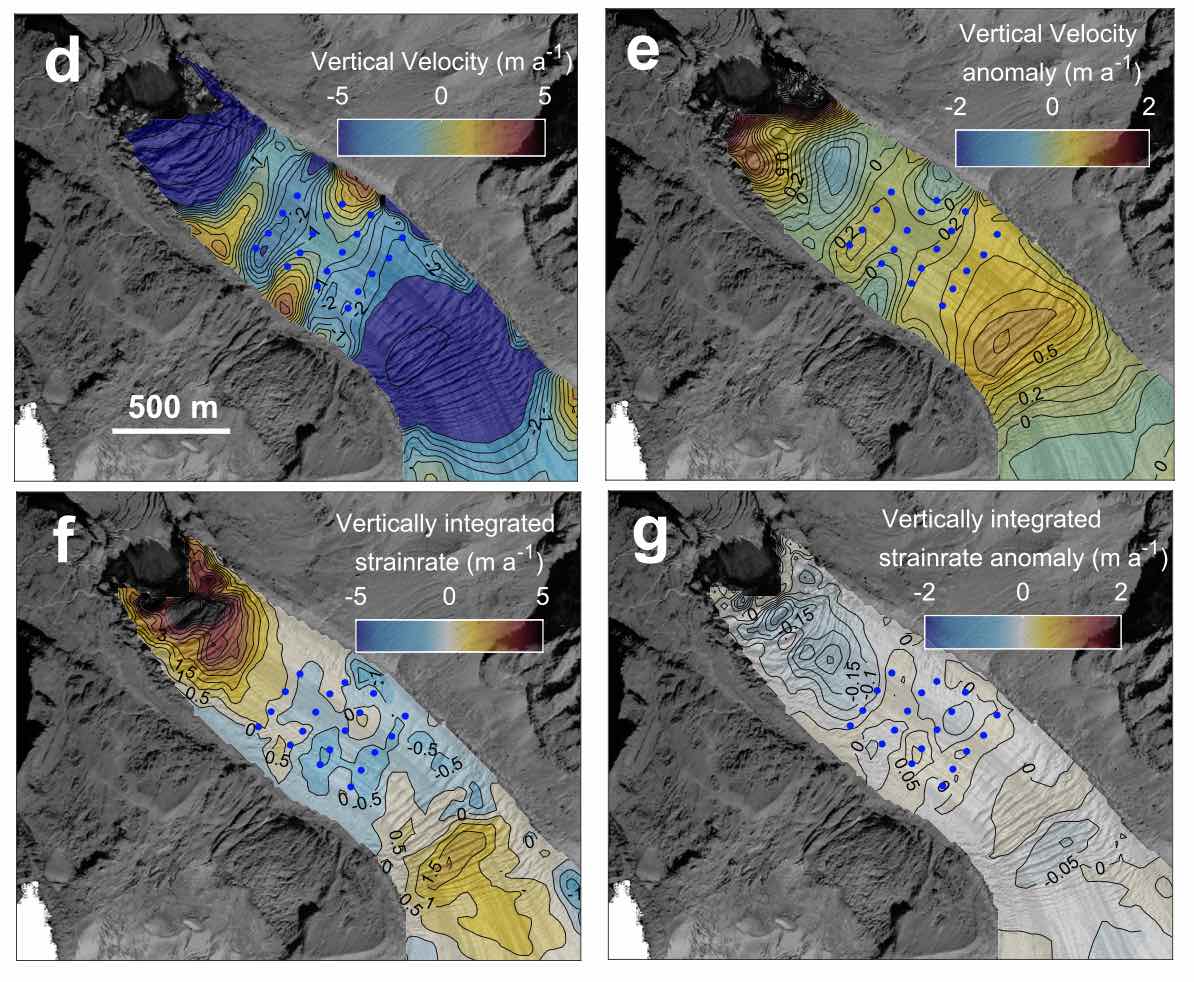 Glacier basal motion is responsible for a large part of ice flux in temperate alpine glaciers and outlet glaciers of ice sheets. However, the hydromechanical processes by which basal water controls sliding at the glacier bed are poorly known in large part because observations are very scarce. Consequently, the impact of surface melting and meltwater input on the future of mountain glaciers and outlet glaciers of ice sheets remains unclear. Here, we use a comprehensive data set of in situ measurements performed over 2 years on the Argentière Glacier in the French Alps, complemented by state-of-the-art ice flow and hydrology modeling, to investigate changes in water storage at the ice-bedrock interface. We find strikingly large uplifts ranging between 0.20 and 0.90 m over the winter/spring seasons in the ablation zone. We show that this uplift is mostly related to enhanced bed separation as a result of increased basal water storage. We expect this study to be helpful to the glaciological community studying basal sliding and its modulation by sub-glacial hydrology with a view of improving predictions of the future behavior of mountain glaciers and outlet glaciers of ice sheets. 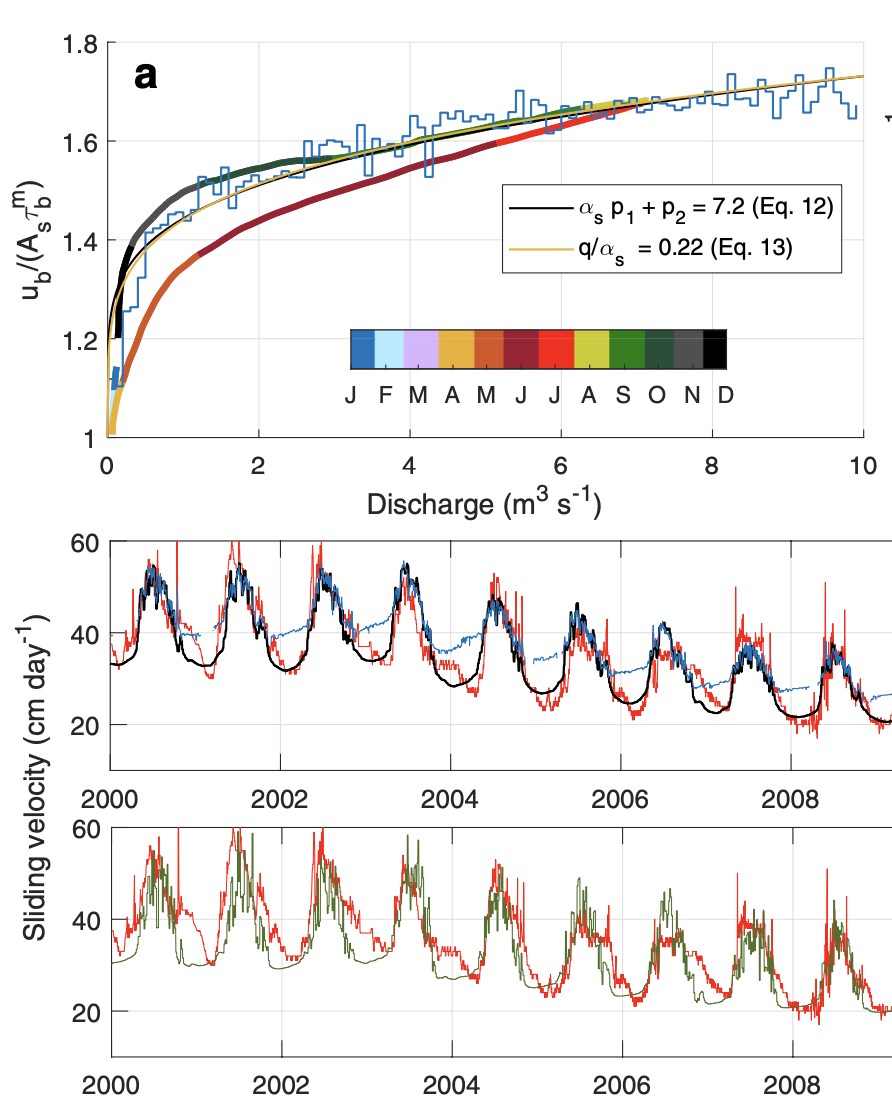 Predicting the sliding speed of glaciers and ice sheets is challenged by the difficulties of assessing the water pressure at the glacier base. Here, we improve the coupling between existing theories about basal friction and subglacial hydrology by introducing a consistent description of roughness and hydraulic transmissivity. Our work breaks with the common view on the subglacial environment that water pressure drives the sliding speed by modulating friction at the glacier base. Instead, our findings show that at multi-day and longer timescales sliding speed and water pressure are imposed by the water discharge along the glacier base that needs to be accommodated. Our results open new perspectives for understanding contemporary glacier and ice sheet sliding and predicting its future behavior under changing climate.

The Thwaites Eastern Ice Shelf (TEIS), the only remaining pinned floating extension of Thwaites Glacier, has 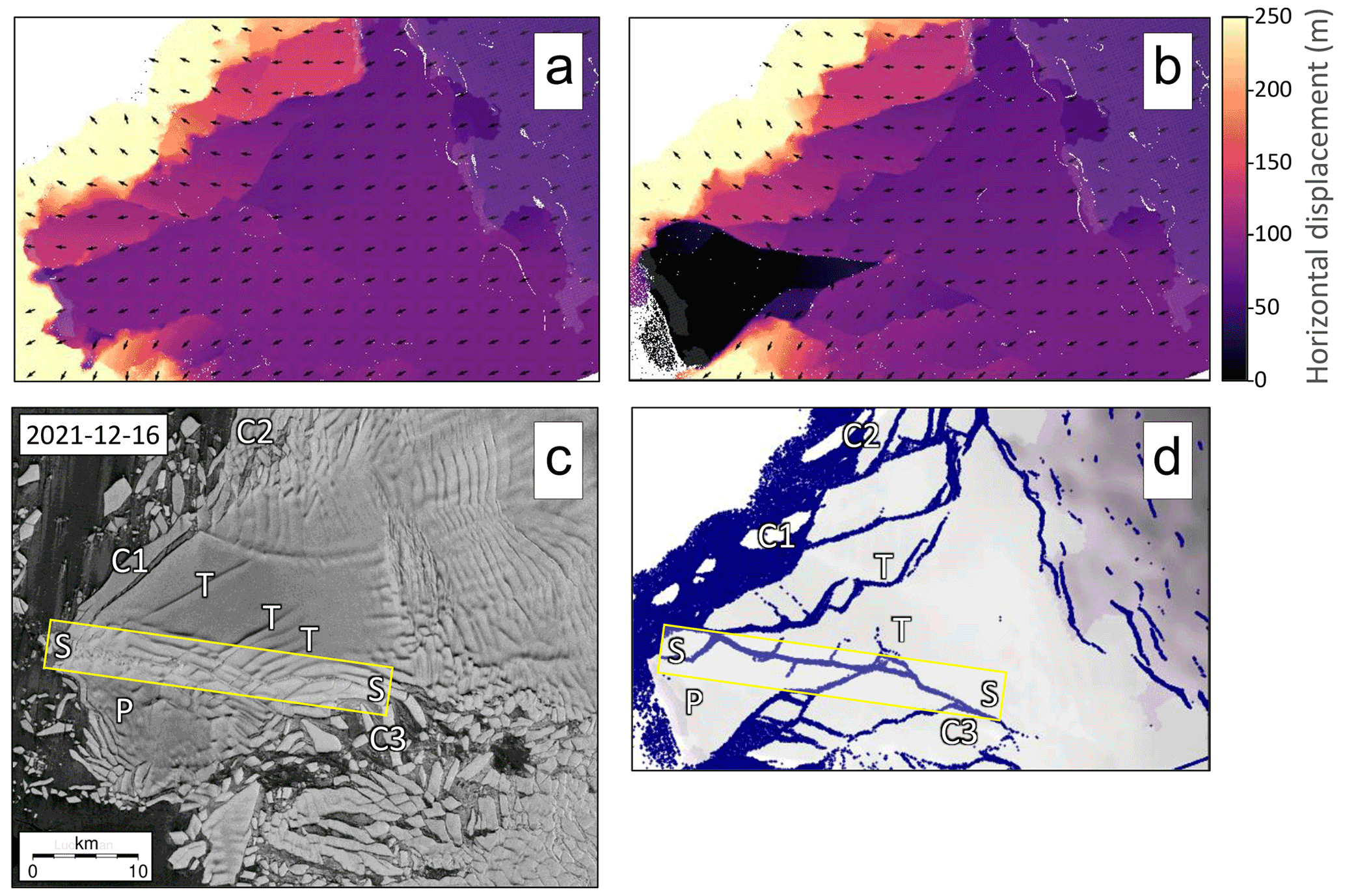 undergone a phase of significant fragmentation during the last decade.  Observations as well as simulations support the theory that the glacier's acceleration increased the damage in the floating part of the ice by backstress imposed from its pinning points. HiDEM (Helsinki Discrete Element Model) simulations primed with basal friction coefficients obtained by means of Elmer/Ice simulations using data assimilation indicate a significant zone of shear, upstream of the main pinning point, seeding damage on the shelf. Subsequently, basal melting and positive feedback between damage and strain rates weakened TEIS, allowing damage to accumulate. Despite a diminishing backstress caused by a shrinking pinning point, accumulation of damage has ensured that the ice in TEIS in the shear zone remained the weakest link in the system. Besides hydro-fracturing and detachment from pinning points, this study suggest a third mechanism for ice-shelf instability: backstress triggered failure.