How seasonal cycle in basal melting contribute to observed changes in ice-shelf speed over the year? 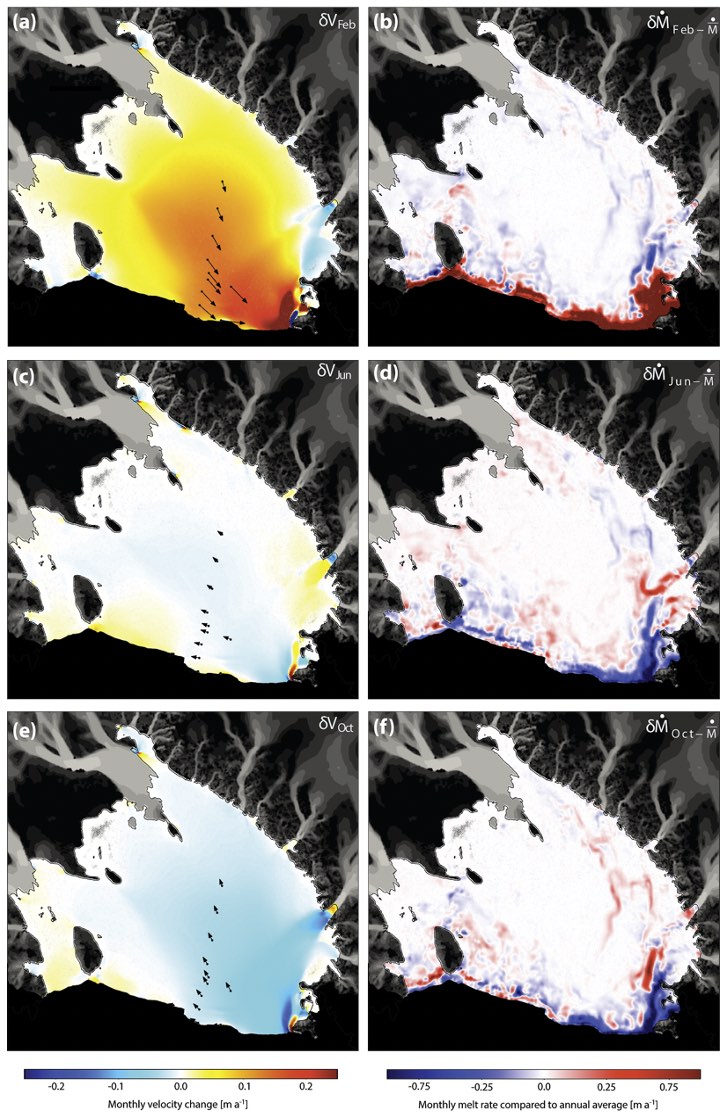 Ice shelves play a critical role in modulating dynamic loss of ice from the grounded portion of the Antarctic Ice Sheet and its contribution to sea-level rise. Recent GPS observations of the Ross Ice Shelf (RIS), one of the largest ice shelves in Antarctica, reveal an annual cycle of ice velocity, with a maximal velocity anomaly reaching several meters per year at most stations. There are a lot of possible reasons for such a cycle. Recent measurements and modelling have shown that basal met rates along the ice front and those near Ross Island and Minna Bluff can change substantially at seasonal timescales, with high melt rates occurring during summer when the upper ocean along the western RIS ice front is warmed by insolation after the sea ice has been removed by melting and advection.

In this study, resulting from a collaboration between the Scripps Institution of Oceanography (University of California San Diego) and the Earth & Space Research Institute (Seattle), we use the Shallow-Shelf Approximation implemented in Elmer/Ice, forced with monthly basal melt rates from an ocean model, to explore the contribution of the strong seasonal cycle in basal melting toward changes in ice velocity over the year.

Our modelling shows that melt-rate response to changes in summer upper-ocean heating near the ice front will affect the future flow of RIS and its tributary glaciers. However, modelled seasonal flow variations from increased summer basal melting near the ice front are much smaller than observed, suggesting that other as-yet-unidentified seasonal processes are currently dominant.