Written by Olivier Gagliardini on 25 January 2019. 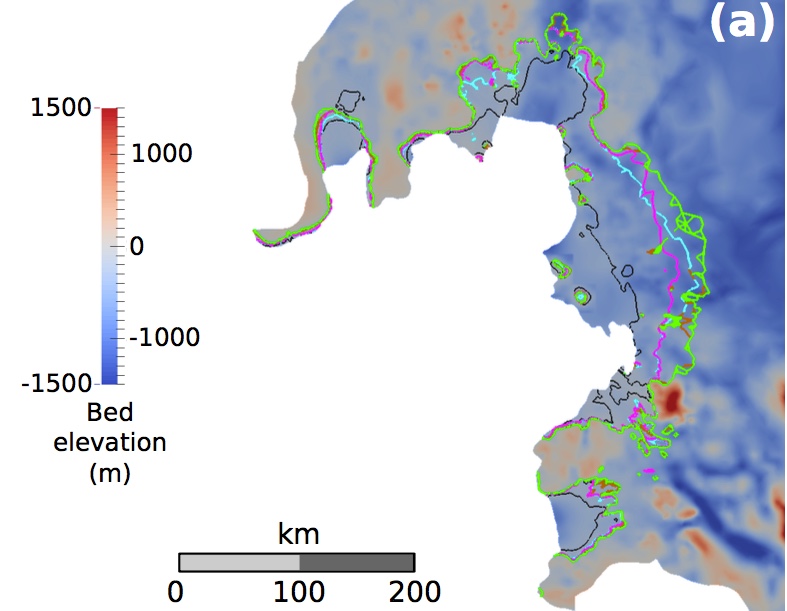 Reliable projections of ice sheets’ future contributions to sea-level rise require models that are able to accurately simulate grounding-line dynamics, starting from initial states consistent with observations. In this new article, we use Elmer/Ice to simulate the centennial evolution of the Amundsen Sea Embayment (the most active drainage basin of the antarctic ice sheet) in response to a prescribed perturbation in order to assess the sensitivity of mass loss projections to the chosen friction law, depending on the initialisation strategy. To this end, we take advantage of inverse methods implemented in Elmer/Ice to construct three different model states by inferring both the initial basal shear stress and viscosity fields with various relative weights. Then, starting from each of these model states, prognostic simulations are carried out using a Weertman, a Schoof and a Budd friction law, with different parameter values. These experiments demonstrate that although the sensitivity of projections to the chosen friction law tends to decrease when more weight is put on viscosity during initialisation, it remains significant for the most physically acceptable of the constructed model states. In addition, it turns out that independently of the considered model state, the Weertman law systematically predicts the lowest mass losses. Finally, because of its particular dependence on effective pressure, the Budd friction law induces significantly different grounding-line retreat patterns than the other laws and predicts significantly higher mass losses. These conclusions urge the scientific community to undertake major efforts in order to get a better understanding of processes at the root of basal motion, with the aim of developing reliable friction laws that could be used in models to produce accurate estimates of future contribution of ice sheets to sea level rise.