Written by Olivier Gagliardini on 20 April 2015.

Bolivian glaciers are an essential source of fresh water for the Altiplano, and any changes they may undergo in the near future due to ongoing climate change are of particular concern. Glaciar Zongo, Bolivia, located near the administrative capital La Paz, has been extensively monitored by the GLACIOCLIM observatory in the last two decades. Here we model the glacier dynamics using the 3-D full-Stokes model Elmer/Ice. The model was calibrated and validated over a recent period (1997–2010) using four independent datasets: available observations of surface velocities and surface mass balance were used for calibration, and changes in surface elevation and retreat of the glacier front were used for validation. Over the validation period, model outputs are in good agreement with observations (differences less than a small percentage). The future surface mass balance is assumed to depend on the equilibrium-line altitude (ELA) and temperature changes through the sensitivity of ELA to temperature. The model was then forced for the 21st century using temperature changes projected by nine Coupled Model Intercomparison Project phase 5 (CMIP5) models. Here we give results for three different representative concentration pathways (RCPs). The intermediate scenario RCP6.0 led to 69+/-7% volume loss by 2100, while the two extreme scenarios, RCP2.6 and RCP8.5, led to 40+/-7% and 89+/-4% loss of volume, respectively.

Written by Olivier Gagliardini on 22 March 2015. This paper investigates the evolution of Derwael Ice Rise in Antarctica, by comparing the internal radar stratigraphy with model output from Elmer/Ice. Ice rises are situated within ice shelves and have a spatially confined flow regime with local ice divides. Beneath the divides, the ice stratigraphy often develops arches (a.k.a Raymond Bumps) with amplitudes that record the divide's horizontal residence time and surface elevation changes. By comparing the arch amplitudes with different model scenarios this study shows that Derwael Ice Rise has maintained its local flow regime for at least 5000 years. This delivers and important tie-point to better understand the ill-constrained deglaciation history in this sector of Antarctica. The combination of geophysical data and modelling also emphasizes that the surface mass balance and ice rheology need to be well-constrained for a reliable interpretation of the Raymond arches.

Written by Olivier Gagliardini on 16 February 2015. 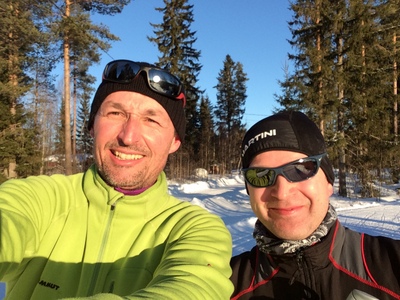 Thomas Zwinger and Olivier Gagliardini are currently having an intensive workshop on sliding somewhere in Finland (the exact location is keep secret). One can be sure that great progress regarding sliding in Elmer/Ice will be make by the end of this week.