Before the Nordic Branch IGS meeting this year in Rovaniemi, Finland, an Elmer/Ice beginners course will be held on October 22. And 23., 2018, at the Arcticum House in Rovaniemi. The course description and a registration link can be found from CSC’s training pages.

We are currently also planning for an advanced Elmer/Ice workshop taking place at the premises of CSC after the Nordic Branch meeting from October 29.-31., 2018. The registration page can also be found from CSC’s training pages. We will decide on October 7., if there is a sufficient amount of participants to have this course.

The built-in inversion capabilities of Elmer/Ice have been used to determine the change of basal friction coefficients below the glacier at Basin 3, Austfonna, during the acceleration phase of its recent surge. This time series, showing the unplugging of the stagnant ice front, was made possible by a highly temporal and spatial resolved set of satellite observations. 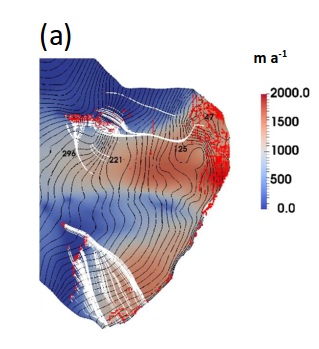 Observations also provided information on the crevasse field at the glacier, which was used to compare with the results obtained by the discrete element model, HiDEM, which was used to determine the instantaneous fractures as a reaction to the changing inverted basal friction. Identifying those crevasses that are deep enough to act as a path for surface water towards the bed and using a simplified hydraulic model, the possible mechanisms that lead to the surge of Basin 3 in early 2013 are discussed in this paper.

The picture shows the basal sliding velocities computed by Elmer/Ice as well as the flow path according to the hydraulic potential of water entering the deepest crevasses (red dots) that have been computed with HiDEM.

Written by Olivier Gagliardini on 23 April 2018. 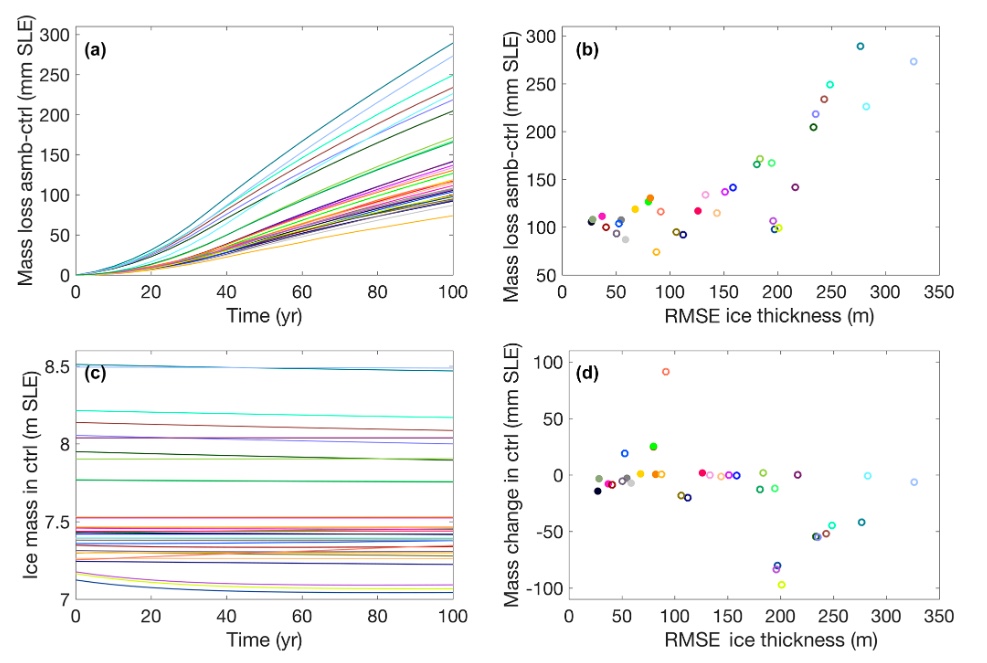 Earlier large-scale Greenland ice sheet sea-level projections (e.g. those run during the ice2sea and SeaRISE initiatives) have shown that ice sheet initial conditions have a large effect on the projections and give rise to important uncertainties. The goal of this initMIP-Greenland intercomparison exercise is to compare, evaluate, and improve the initialisation techniques used in the ice sheet modelling community and to estimate the associated uncertainties in modelled mass changes. initMIP-Greenland is the first in a series of ice sheet model intercomparison activities within ISMIP6 (the Ice Sheet Model Intercomparison Project for CMIP6), which is the primary activity within the Coupled Model Intercomparison Project Phase 6 (CMIP6) focusing on the ice sheets. Two experiments for the large-scale Greenland ice sheet have been designed to allow intercomparison between participating models of (1) the initial present-day state of the ice sheet and (2) the response in two idealised forward experiments. The forward experiments serve to evaluate the initialisation in terms of model drift (forward run without additional forcing) and in response to a large perturbation (prescribed surface mass balance anomaly); they should not be interpreted as sea-level projections. We present and discuss results that highlight the diversity of data sets, boundary conditions, and initialisation techniques used in the community to generate initial states of the Greenland ice sheet. We find good agreement across the ensemble for the dynamic response to surface mass balance changes in areas where the simulated ice sheets overlap but differences arising from the initial size of the ice sheet. The model drift in the control experiment is reduced for models that participated in earlier intercomparison exercises.