Written by Olivier Gagliardini on 26 January 2017. 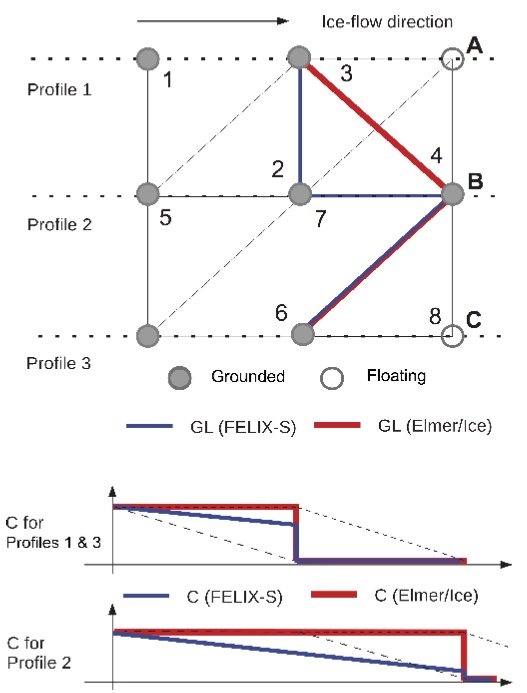 We present a comparison of the numerics and simulation results for two "full" Stokes ice sheet models, FELIX-S (Leng et al. 2012) and Elmer/Ice (Gagliardini et al. 2013). The models are applied to the Marine Ice Sheet Model Intercomparison Project for plan view models (MISMIP3d). For the diagnostic experiment (P75D) the two models give similar results ( <  2 % difference with respect to along-flow velocities) when using identical geometries and computational meshes, which we interpret as an indication of inherent consistencies and similarities between the two models. For the standard (Stnd), P75S, and P75R prognostic experiments, we find that FELIX-S (Elmer/Ice) grounding lines are relatively more retreated (advanced), results that are consistent with minor differences observed in the diagnostic experiment results and that we show to be due to different choices in the implementation of basal boundary conditions in the two models. While we are not able to argue for the relative favorability of either implementation, we do show that these differences decrease with increasing horizontal (i.e., both along- and across-flow) grid resolution and that grounding-line positions for FELIX-S and Elmer/Ice converge to within the estimated truncation error for Elmer/Ice. Stokes model solutions are often treated as an accuracy metric in model intercomparison experiments, but computational cost may not always allow for the use of model resolution within the regime of asymptotic convergence. In this case, we propose that an alternative estimate for the uncertainty in the grounding-line position is the span of grounding-line positions predicted by multiple Stokes models.