Environmental influences on the calving behaviour of Helheim 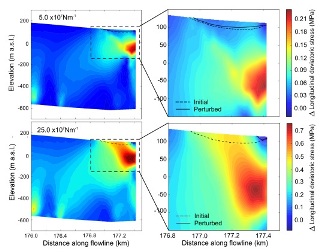 that has been tuned using observations (velocity, temperature distribution) including Benn's calving criterion. The model was forced with different melting scenarios at its face, different surface melt distributions and - in a simplistic way – also ice mélange in front of the terminus. According to the findings with this model, it is rather the changing surface mass balance than the expected increase in ocean induced melting or the disappearing ice mélange that have the highest impact on accelerating the downwasting of a Greenlandic tide-water glacier such as Helheim.

The picture shows the difference in stress distributions and obtained crevasse depths with respect to the undisturbed ice front for different values of applied back-stress (representing the effect of ice mélange).