Sliding relations for glacier slip with cavities over three‐dimensional beds

Written by Olivier Gagliardini on 06 January 2020. 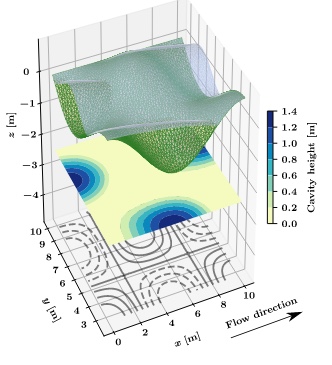 Parts of ice sheets that flow into the oceans and affect sea level can flow unusually fast by slipping over their beds. We use Elmer/Ice to solve for the first time in three dimensions the equations that describe the flow of ice as it slips over a bumpy rock bed. We include the important tendency for glaciers to separate from rock and form water‐filled cavities down‐glacier from bumps. These calculations indicate that resistance to slip depends sensitively on the bump shape and spacing. Cavities can cause the bed to become more slippery the faster the ice slides, with this destabilizing effect being more severe for bumps that are laterally narrow and widely spaced. However, bumps with steeply sloping up‐glacier sides can reverse this effect and cause resistance to slip to increase over a wide range of increasing slip velocity. This diverse behavior highlights the need for estimates of glacier slip velocity to incorporate the actual topography of glacier beds. 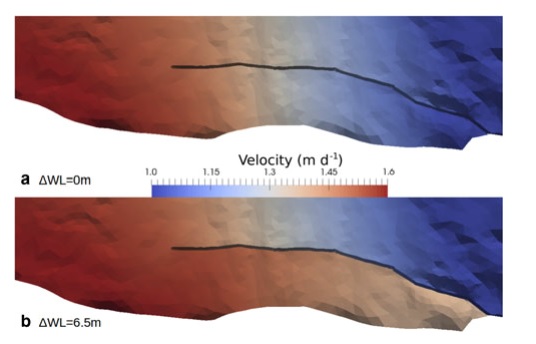 hlights the influence of surface meltwater and tides on crevasse opening leading to major calving events at grounded tidewater glaciers, such as Bowdoin Glacier, Northwest Greenland, where most calving occurs by a few large events resulting from kilometre-scale fractures forming parallel to the calving front. High-resolution terrestrial radar interferometry data of such an event reveal that crevasse opening is fastest at low tide and accelerates during the final 36 h before calving. Using  Elmer/Ice, the authors identify the crevasse water level as a key driver of modelled opening rates. Sea water-level variations in the range of local tidal amplitude (1 m) can reproduce observed opening rate fluctuations, provided crevasse water level is at least 4 m above the low-tide sea level. The accelerated opening rates within the final 36 h before calving can be modelled by additional meltwater input into the crevasse, enhanced ice cliff undercutting by submarine melt, ice damage increase due to tidal cyclic fatigue, crevasse deepening or a combination of all these processes.

Written by Olivier Gagliardini on 26 November 2019. 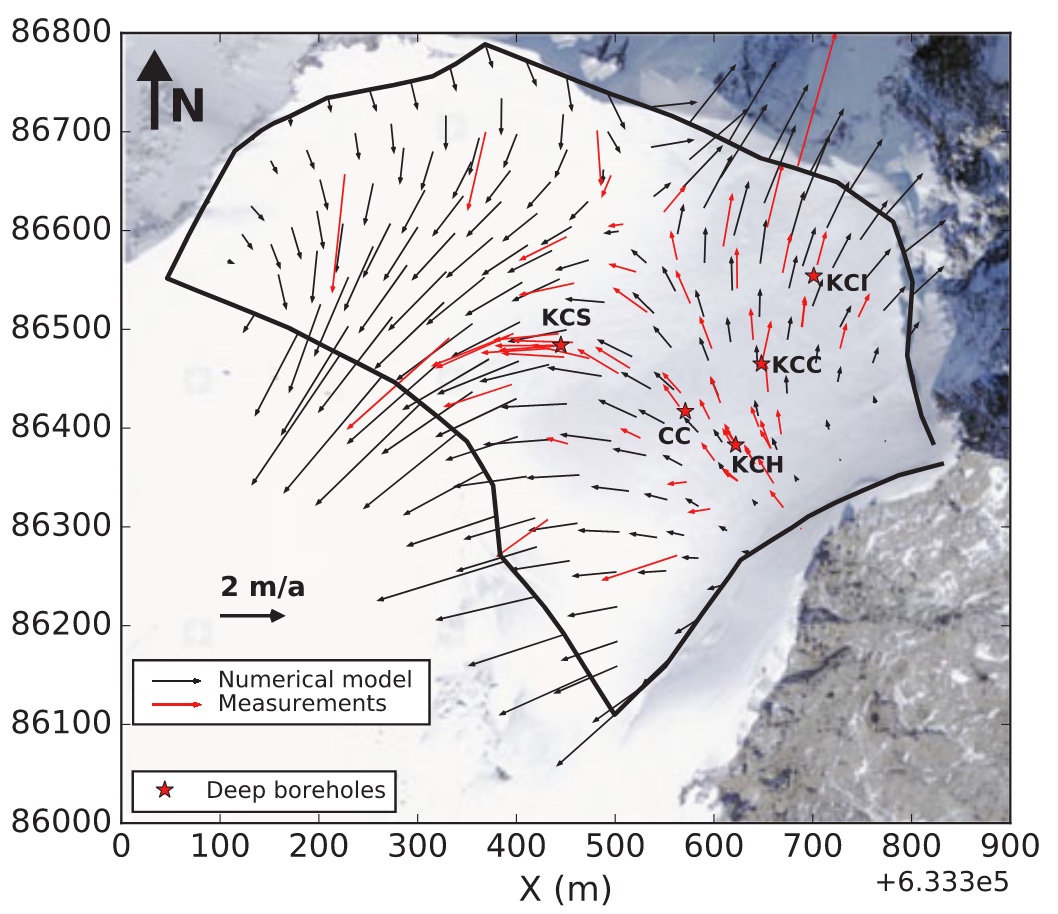 The high-Alpine ice-core drilling site Colle Gnifetti (CG), Monte Rosa, Swiss/Italian Alps, provides climate records over the last millennium and beyond. However, the full exploitation of the oldest part of the existing ice cores requires complementary knowledge of the intricate glacio-meteorological settings, including glacier dynamics. Here, we present new ice-flow modeling studies of CG, focused on characterizing the flow at two neighboring drill sites in the eastern part of the glacier. The 3-D full Stokes ice-flow model is implemented using the finite element software Elmer/Ice and is thermo-mechanically coupled, includes firn rheology, firn densification and enthalpy transport. Measurements of surface velocities, accumulation, borehole inclination, density and englacial temperatures are used to validate the model output. We calculate backward trajectories using the Runge–Kutta integrator implemented in ParaView and map the core catchment areas. This constrains, for the first time at this site, the so-called upstream effects for the stable water isotope time series of the two ice cores drilled in 2005 and 2013. The model also provides a 3-D age field of the glacier and independent ice-core chronologies for five ice-core sites. Considering the ice core recovered in 2013, the model predicts a near-to-basal age of ~3000 years, which is consistent with radiocarbon dating results. Model results are a valuable addition to the existing glaciological and ice-core datasets. This especially concerns the quantitative estimate of upstream conditions affecting the interpretation of the deep ice-core layers.